“Hope is the thing with feathers that perches in the soul – and sings the tunes without the words – and never stops at all.” (Emily Dickinson, 1830-1886)

In the hurly burly of semester my inbox husbandry can leave a lot to be desired. It currently bears the footprint of the comings and goings of your friendly VMSG Committee as they have put together: a virtual conference, a workshop and a virtual fieldtrip, and updated and breathed further life into a robust strategy for Equality, Diversity and Inclusion. All while taking it in turns to attend meetings, review applications, lobby other organisations and generally provide support to one another. Phew!

One of the end results is going to be a really rather splendid Virtual Annual meeting (afternoons 6th- 9th January  2021: see below) which at the time of writing more than 260 of our community have signed up to attend –  warm-up Yoga and all. Its our hope that this will be inclusive and welcoming but most of all a much needed vaccination with exciting science to see us through the first few months of 2021 and into a new beyond!

This is my last Newsletter as Editor – it has been a pleasure rounding up all the great things the members of the Volcanic and Magmatic Studies Group have been up to, I’m moving on to the new VMSG Outreach role – lots of luck and inspired sentences to my successor. (Jenni)

A note from our (democratically-appointed) President

The VMSG Committee is sad to say goodbye to Mike Cassidy (University of Oxford), George Cooper (University of Cardiff), Sam Engwell (BGS) and Jessica Pugsley (University of Aberdeen) who have been such great colleagues to work with. Over the last few years, all have made important contributions to the work that we do, much of which goes on behind the scenes.

In addition to sending out regular #VMSG tweets on social media, Mike has played a major role in organising the Addressing Inequalities discussion panel sessions. He has also recently helped establish the VMSG ECR lecture award, which this year will be sponsored by ZEISS. George, in his role as field trip secretary helped organise the Arran fieldtrip and has put the wheels in motion for several other trips that VMSG will run in post-Covid pandemic times. Sam has been instrumental in both compiling and analysing EDI datasets from the past few years of VMSG events, and also the publication of these findings in our first Equality, Inclusivity & Diversity report. Jess has been the VMSG Student Rep for the last two years and, in addition to providing vital student feedback to the committee, has been responsible for collating info on new PhD studentships.

Mike, George, Sam and Jess will all be missed, especially at what have now become regular virtual VMSG Committee coffee meetings. Lastly I’d like to thank everyone on the committee for giving up so much of their time in this challenging year. The virtual VMSG meeting in January 2021 looks set to be a great opportunity for sharing science, attending virtual fieldtrips, yoga, quizzes and even a movie night. What a great start to 2021! (Sally)

Traditionally the VMSG community convenes in a site of magmatological magnificence in the UK for a 2.5 day meeting shortly after the New Year. This year we are taking the science online, and adding a sprinkle of the sense of fun, community and connection this event normally brings. It will run each day from 13:00-17:00 with additional workshops.

Registration is still open here until the 5th of January with inclusion-encouraging rates!

Some 132 abstracts were submitted, and we have divided them into nine thematic sessions with pre-recorded talks to watch, live Q&A and flash-talks. We will have two parallel sessions running at any one time with dedicated keynotes.

The full program will be available in the very near future. Watch @VMSG_UK for updates.

Volcano-magmatism and the environment (Keynote: Tom Gernon, University of Southampton)

Every day there will be the chance to join in with some pre-session yoga with our own fully-qualified Volcano-Yogi Master Celine Vidal (University of Cambridge).  There will also be two evening social events –  a Quiz and an Interactive Volcano Movie Night. The Quiz will be hosted by Hugh Tuffen and his volcanological posse from the University of Lancaster.

vVMSG and the Virtual Field Trips

We aren’t letting a global pandemic get in the way of a conference field trip.

We’ll start with a pre-conference workshop entitled “An introduction to creating virtual field trips – examples from the Devonian lavas of Scotland”. This will run 8.30-12 on the 6th January. Register for free here.

The conference field trip “Exploring scales of lava emplacement in Namibia, Skye and Mull” will run 9-12 on the 7th January. Register for free here.

This workshop is being run by Jess Pugsley and John Howell of the University of Aberdeen.

We have just hosted the third and final panel in our series of discussions about ways in which we can more equally distribute opportunities to engage, contribute and thrive within VMSG. During this panel we heard from our own President Sally Gibson, about measures we have taken in recent years, and from Jo O’Leary the Head of Equality, Diversity and Inclusion at UKRI. As well as an opportunity for attendees to provide their views on priorities among the various actions arising from the earlier panels, we were also able to ask questions of both Sally and Jo, and to hear from Sam Engwell about the ongoing work on EDI at VMSG. A full report and YouTube recording of this Panel will emerge in the New Year.

You can read the reports on Panels 1 and 2, and find links to the two earlier panels here. We are also presenting a summary of this work at vVMSG.

By receiving the VMSG travel Bursary for fieldwork, I have been able to undertake fieldwork on Orkney (Scotland). As part of my PhD project, I have been investigating the effect of magma evolution on dyke emplacement using the laterally propagating segmented dykes at Birsay Orkney (Healy et al., 2018) as a case study, along with a comparison to other dykes within the Camptonite-Monchiquite suite. I have been primarily investigating this from a geochemical and petrological perspective, focusing on interpreting the temperature-pressure and volatile conditions of crystallization relative to emplacement and modelling the rheological evolution. However, the samples that I have been working on were initially collected for a different project and are inadequate for assessing the distribution of internal textural features within the dyke. The primary aim of this fieldwork was to collect targeted sample transects, and field notes of the laterally propagating segmented dykes at Birsay Orkney (Healy et al., 2018) along with other non-segmented dykes within the suite. 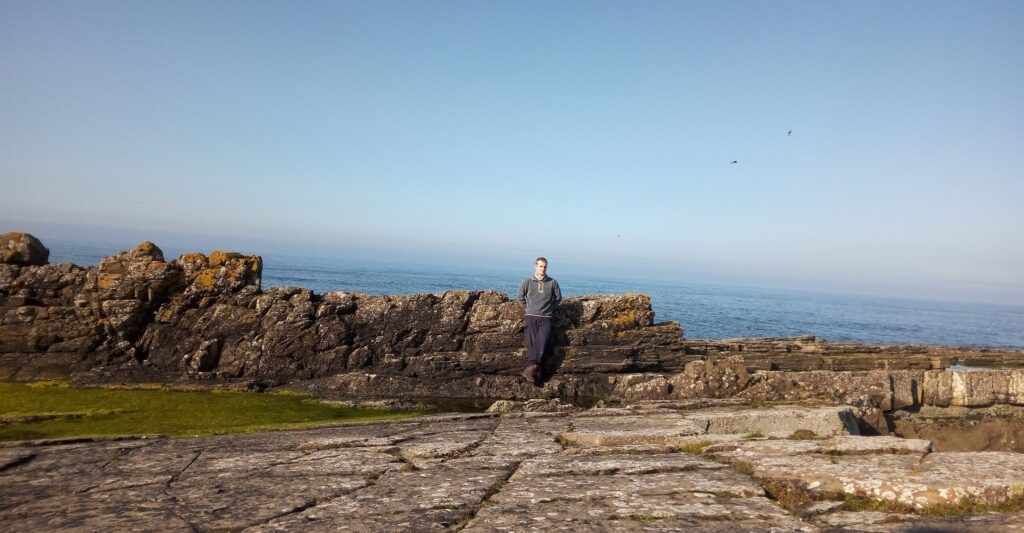 I carried out this fieldwork from the 16th to the 21st of September travelling up late on the 15th. Initially, for this fieldwork, I went around the outcrops from Birsay bay to the Brough of Birsay, and round to Whitaloo point to make a general assessment of the outcrops to identify optimal locations for sampling & descriptions. Following this systematically sampled 2 transects across one of the 1m wide segments of the dyke at 59.139305N 3.304090E and 2 transects each from 2 different segments from the <30cm dyke at 59.136166 N, -3.320857 E, along with sampling the western sections where cm-scale phenocrysts are preserved.  South of Birsay I investigated the coastline towards the Bay of Skaill with the aim of describing and sampling dykes from the suite which do not share the characteristic morphology or lateral emplacement of the dykes at Birsay, of which I systematically sampled from two dykes at Northdyke and Marwick Bay.

Overall, from this fieldwork, I have successfully collected the dyke transects essential for assessing the distribution of internal textural features within the dyke. Going forwards I intend to process and analyze these samples from the transects on the SEM-BSE-EDS, which I will use to assess the homogeneity and consistency of textural features such as shape preferred orientation and ocelli/vesicle distribution. This is important to constrain the mixed volatile abundance and exsolution along with flow conditions during formation. I am very grateful to VMSG for enabling me to carry out this essential fieldwork for my PhD research project.