Origins: Understanding the impacts of historical inequalities in volcanology and magmatic research

Jazmin Scarlett described her work on colonial attitudes during eruptions on St. Vincent and pointed out that there was subtle racism present, which was easier for her, as a mixed race researcher of Caribbean origin to recognise and dissect. But this is also hard to face, and that the writing of this is motivation in of itself to make this historical legacy more obvious.

We must recognise and learn about the importance of past eruptions and resource in generating present day inequalities, and the benefits to the UK of these inequalities. We should be aware if modern volcanology practices reproduce colonialism. Watch this space for her future papers to learn more.

Drawing on her research in Latin America, Elisa Sevilla pointed out that knowledge circulation and ‘knowledge power inequality’ is dictated by colonial and post-colonial relationships. For example, critical fieldwork was facilitated by using local workers and existing colonial structures.  She also mentioned the importance of language and citations disparities in disseminating research and thus making research visible in different ways.

Kathryn Goodenough demonstrated the ways the British Geological Survey is beginning to acknowledge historical privileges and how its foundation has direct connections with Britain’s Slave Trade. This is a connection that many of our audience indicated they were learning about for the first time (BGS in particular and historical UK research in general). She emphasised that it is important for all of us to acknowledge this past and our privilege and to join with the underserved communities in the UK to dismantle the negative legacies from this.

Using his experience of developing collaborations in Africa, Matthieu Kervyn discussed the importance of listening but also how we do need to engage and demonstrate that is it not just for underserved communities to address and solve these issues. He pointed out that current practices tend to assume that improving diversity involves knowledge flow from westernised countries elsewhere and actually research priorities should be defined together from the start.

Richie Robertson discussed how even in the comparatively recent past predominantly colonial scientists worked for local agencies, and the importance to him of being able to see other black scientists to provide that inspiration and motivation. This was Keith Rowley – who is now the Prime Minister of Trinidad! This conspicuous lack creates unconscious messages. So we need to consider how to create opportunities and inspiration across different communities.  He then pointed out the value of proper collaboration where engagement should happen at the point of defining the research questions to incorporate the priorities and interests of local scientists: ENGAGE, CONNECT AND CONSULT!

Prior to the panel we asked our audience to identify what they perceived as barriers to diversity and inclusion. These answers can be categorised as follows:

The answers connect well with the points made in the panel, so in the post panel survey we embedded some of the answers into a couple of questions for the audience (having heard the speakers) and to gauge early views about what we should emphasise with our action plan.

This prioritisation of barriers was broadly echoed by the 33 people who ranked the criteria: 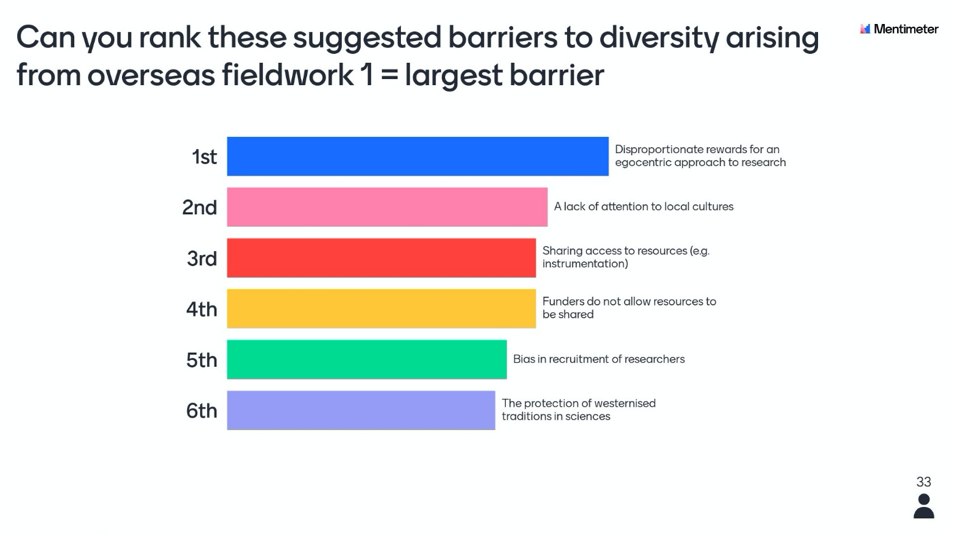 The frustration with being able to share and distribute funding and resource was echoed in our question about that. 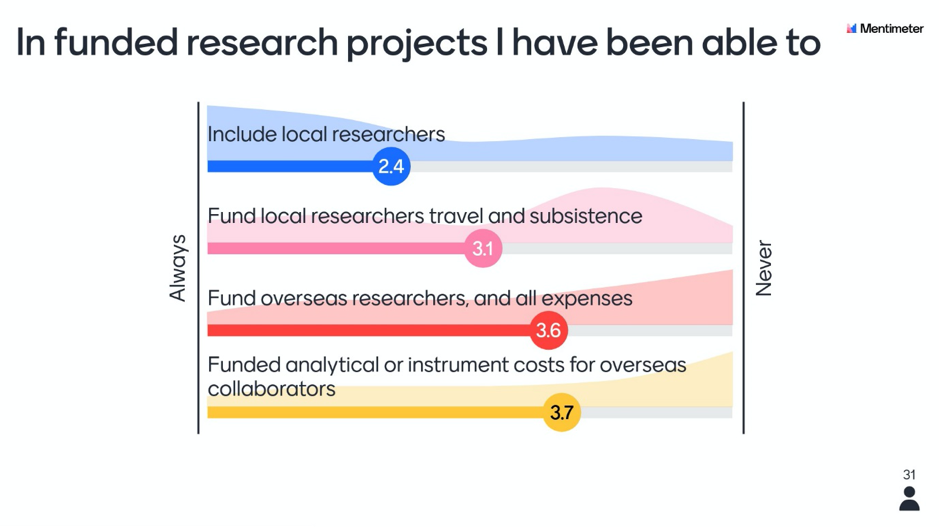 Physical inclusion being relatively easy and somewhat widely done (essentially invited researchers along for the ride). It is clearly much harder to allow collaborator’s genuine participation in the action of research and creation of new knowledge on equal funding terms. Some researchers pointed to ‘low cost’ ways to enable proper participation in the free text responses.

During the discussion the audience made several comments about positive steps we could take (which were endorsed by other audience members using Mentimeter). We used the most tangible and popular of these for another ranking exercise in our post panel survey. 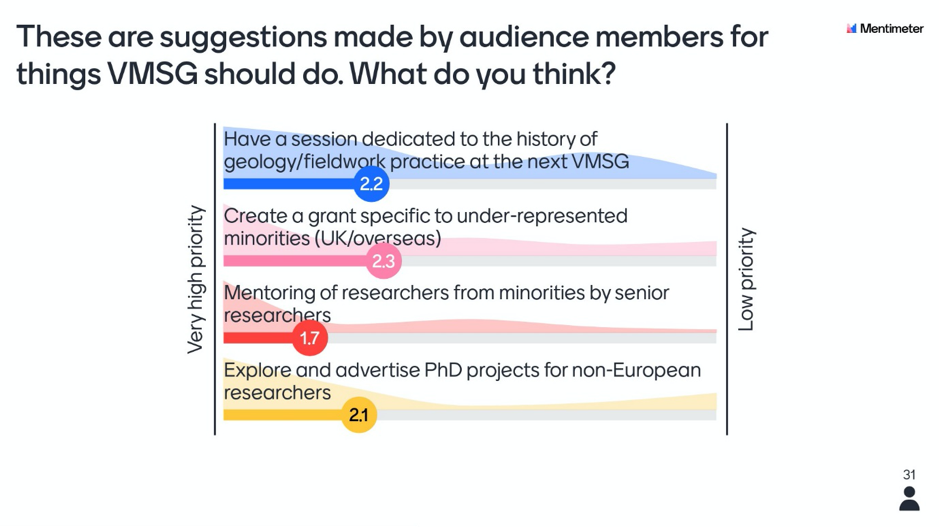 There were also multiple ‘free’ survey comments made by participants about the extent to which some of these historical and colonial perspectives were relatively new to the VMSG audience. In sum there was a strong desire expressed to develop (or co-develop with the Geological Society community generally) a teaching resource or include keynotes or sessions about the history of geology that acts to acknowledge the privileged position of UK researchers and to decolonise current teaching and thinking. (POSSIBLE ACTION ONE).

We also had several important points about funding and resource availability: we should publicise and promote funding opportunities for non-European researchers to (1) come to the UK, (2) for research that more fully explores the colonial past and its intersection with volcanic eruptions (or magmatic resources) and (3) do more to share and promote ways we have managed to successfully navigate the current funding system to create equitable partnerships. (POSSIBLE ACTION TWO). See Appendix 1 as first step.

A third clear action to focus on was to increase the visibility of black and minority researchers (role models, and amplifying success) and the knowledge they generate (considering how and where we publish and the kudos we attach to it, and who gatekeeps access to particular journals). (POSSIBLE ACTION THREE).

A fourth point discussed is a way to use some of the objects from our colonial legacy – museum and rock collections. We can decolonise this legacy and there is a lot to learn from museums, and this can create a virtuous circle of learning. (POSSIBLE ACTION FOUR).

The free-text comments can be viewed in Appendix 2. Appendix 3 contains details of the meeting evaluation and the anonymised audience demographics.